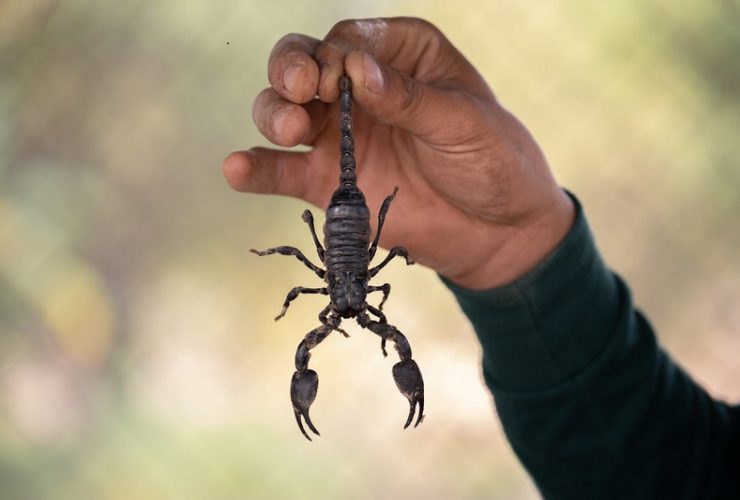 Most people love owning pets, but not everyone is in a situation where they can have a cat or a dog, or even an exotic pet that requires a fair amount of attention. For this reason, exotic arachnids are great choices – namely scorpions. Scorpions are good selections for anyone who wants to provide a safe home for an animal, but their lives are too hectic or their spaces are too small to house anything large. With a scorpion, you only need a tank, the contents of the habitat, and feeder insects. Scorpions are a very hands-off pet – literally! They shouldn’t be handled for a number of reasons, some of which we’ll cover below. Read on to learn more about buying a pet scorpion.

You should know some key facts about scorpions before you make a purchase. For example, scorpions are arachnids, not insects, so they’re related to spiders (and lobsters, actually). They burrow and hunt, using their stingers and claws to pacify and kill prey. Because scorpions stay fairly small – even the largest species rarely grow past 8 inches in length – they tend to eat small insects almost exclusively.

You might not be able to watch your scorpion hunt, though, if you aren’t awake after nightfall. Scorpions are nocturnal creatures and tend to burrow, hide or sleep during the day. Once the sun sets, they emerge. On the other hand, you should not let live insects stay in your scorpion’s enclosure for a period of time. The most important reason is that the insects can potentially harm or attack your scorpion, especially in self-defense.

Why do scorpions glow?

One of the most interesting facts about scorpions is they’re fluorescent – they glow in UV lighting! So if you have a blacklight, your scorpion can look quite different and shine as green or blue. This puzzles scientists, though. They aren’t completely sure about why scorpions glow – they understand the biomechanics of it with the presence of hyaline layer in their outer cuticles, of course, but the purpose of the glow still eludes them. They feel it this fluorescence can exist to better detect light to let them know when it’s night and time to hunt or even to confuse prey.

What kind of habitat do scorpions need?

Scorpions are kept in terrariums with screens covering the tops. They require a small dark hiding spot so they can stay out of sight when they aren’t active. Because many scorpions burrow, they will need some kind of substrate. Depending on the type of scorpion you want, you can also use tree bark, plastic caves, flower pots, and more to provide extra shelter.

The material for the substrate is also important. Coconut husks and peat moss are a great combination for some rainforest scorpions. You should be able to add some water to it so that it is compact and doesn’t have a lot of give. Desert scorpions, on the other hand, would do well with sand and gravel mixed together.

Depending on the type of scorpion, you’ll need to alter the humidity to a certain point. Rainforest scorpions, for example, thrive better in higher humidity levels than desert scorpions do. Be sure to research what environment your scorpion is at home in and adjust the terrarium accordingly.

You can get a heat lamp to the temperatures up, too, but beware of causing the terrarium to be too dry. In addition to the heat lamp, you can purchase a night bulb, which will let you watch your scorpion during its nocturnal activities.

What do scorpions eat?

Scorpions are carnivores. They will do perfectly fine on a diet of crickets and worms. To mix up their diet, though, you can give them roaches and various other small insects. Don’t feed your scorpion any mice or small mammals – it is much more likely that your scorpion will actually be injured than it will have a successful hunt.

If you do not want to feed your scorpion live insects, you can elect to purchase canned grasshoppers and canned snails. These insects should be fed to the scorpion at regular intervals. The only downside is you may have to purchase a supplement or dust to spray or apply to the canned insects so that your scorpion will meet all of its nutritional needs. On the other hand, if you’re feeding the scorpion live crickets, you can practice gut loading. This involves feeding the crickets enough specific food so that they will transfer the nutrients to the scorpion when they’re eaten.

Some scorpions possess a fair amount of venom that has neurotoxins and can be extremely painful to humans. Fatalities from scorpion stings are uncommon, and most scorpions that can cause death from their stings are not sold as pets – they remain in the wild. However, all scorpions do produce venom and can sting if they feel threatened or unsafe.

This is why it is not recommended that you handle your scorpion unless absolutely necessary, such as to change terrariums or to clean the tank. If you attempt to handle your scorpion, you may get stung, or you might end up actually hurting the scorpion.

What scorpion should I buy?

There are a number of different types of scorpions generally available on the market. You should read more about temperaments and types if you’re looking into buying a pet scorpion. Different stores will carry specific ones. A few of the most commonly purchased scorpions include:

Allan’s Pet Center is the premier pet store in Los Angeles if you want exotic pets. We have a number of exotic animals available for sale, from tropical fish to new breeds of snakes to various arachnids and amphibians. We also have supplies available for those who already have pets and want to spruce up the terrarium or change food. If you have any questions about exotic animals or purchasing a new pet, don’t hesitate to contact Allan’s Pet Center today. We make buying a pet scorpion easy!