How to Identify a Venomous Snake

Home / General / How to Identify a Venomous Snake

Snakes, in general, are alarming to many people; venomous snakes are even scarier. However, did you know that venomous snakes are not that easy to find? Less than a third of the entire snake species is venomous, but it is still important to tell them apart.

If you ever find yourself in a sticky situation where you need to tell a venomous snake from a non-venomous snake, use these tips to the best of your ability. However, keep in mind that there are always exceptions to the rule. Many of these tips would involve getting close to the snake to determine if it is venomous or not, so it is always better to be safe than sorry; assume every snake you encounter is venomous and avoid it completely, if possible. If you truly want to find out if a snake is venomous, call an expert.

Venomous Snakes in the United States

First, let’s go over the four venomous snakes that exist in the U.S.: rattlesnakes, copperheads, cottonmouths (AKA water moccasins) and coral snakes.

All are pit vipers except the coral snake. And the coral snake is arguably the most dangerous as it is the exception to many of the rules. We will come back to that in a minute. 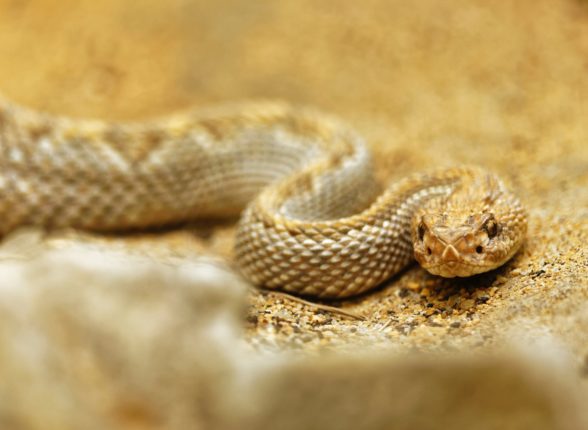 There are plenty of myths that claim they can help you differentiate between a venomous and non-venomous snake. Perhaps you have even heard one or two.

A third myth is that only venomous snakes shake their tails when many will do this. However, the venomous rattlesnake is the only one with a real rattle. 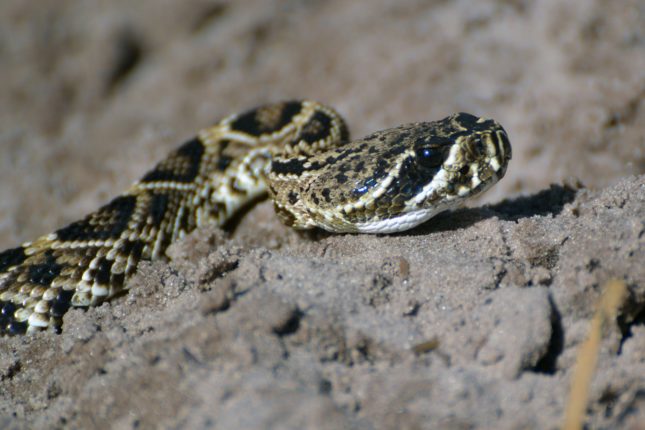 When looking at a venomous snake, look for a big, broad head and elliptical pupils like a cat; most non-venomous snakes have round pupils. Also, keep in mind that most pit vipers have a hole on their face for heat sensing. The hole is located between the eye and nose.

Another giveaway could be the snake’s behavior. For example, cottonmouths/water moccasins will swim on water with their entire body above the water while harmless water snakes swim with only their head above water.

As I said earlier, the coral snake is the trickiest because it has a round head, round pupils and no heat-sensing hole. However, the coral snake is known for its colorful pattern of red, yellow and black stripes. The Scarlet king snake and Florida scarlet snake also have this pattern, so keep this rhyme in mind: “Red touch yellow, kill a fellow. Red touch black, friend of Jack.” In other words, if the red and yellow stripes touch, it is a coral snake. If the red and black stripes touch, it should be harmless. 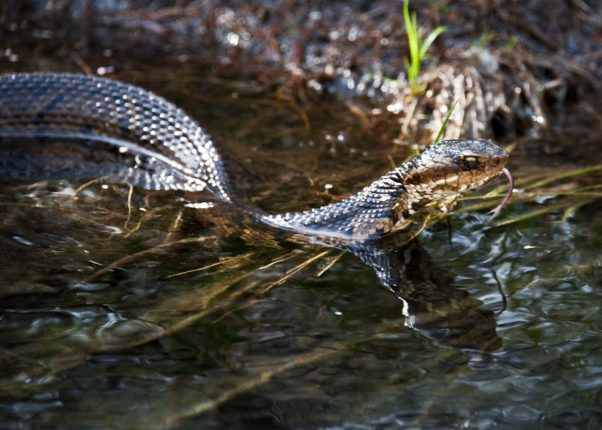 Again, while these tips may help you, there are harmless snakes that mimic venomous snakes’ patterns, and vice versa, so you have to be careful when handling snakes. It is always better to consult an expert than to wind up being bitten, as venomous snake bites can lead to death if not treated properly. 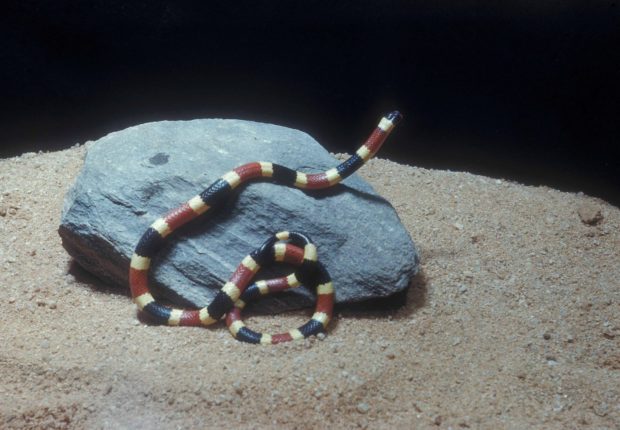