The Best Saltwater Fish to Own

Home / General / Fish / The Best Saltwater Fish to Own 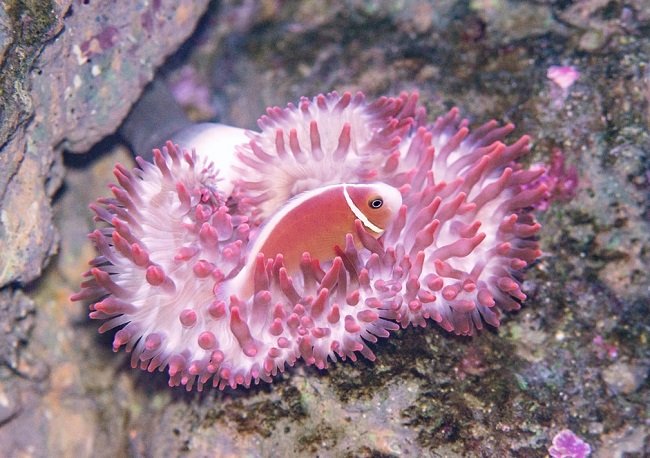 Saltwater aquariums are less common than freshwater aquariums because of the additional maintenance. You need to test alkaline and calcium levels and acquire a filtration system, for example. Yet fish enthusiasts and pet owners can acquire some of the most beautiful fish in the sea for their homes by keeping a saltwater aquarium. Choosing the fish, of course, is extremely important. What are the best saltwater fish to own? That depends on the size of your tank, how many fish you want, the personality you look for in fish, and more. Whether you’re a beginner looking to purchase your first saltwater aquarium or if you’re a seasoned fish owner who wants to return to basics, you can read our list of the best saltwater fish to own and who will be the next addition.

Clownfish (of Finding Nemo fame) are among the most popular saltwater fish to own. They come in a lot of varieties and offer a lot to fish enthusiasts. The Ocellaris clownfish is the most common variety, and its orange and white coloration is easily recognizable. Clownfish are generally peaceful and do not require a lot of maintenance or supervision, nor do they need a very large tank – a 20-gallon tank will suffice. Additionally, Percula clownfish are very visually similar to Ocellaris clownfish, but have some differences in coloration and fins.

You have a number of clownfish options – pick what you love!

Gobies have many species that can be added to your saltwater aquarium. They range from bright to dark colors and can live in small or large tanks. The Clown goby, for example, does well in 10-gallon tanks and gets along well with other fish, but not other gobies. This is actually a common issue with gobies – the Yellow Watchman goby, for example, is as docile as the Clown goby but can be aggressive towards other gobies.

Gobies are visually appealing and varied, too. The Diamond goby is diamond colored with orange dots on its body, while the Firefish goby is dually colored (light silver-blue in the front half of the body turning to red-orange in the rear). A Sharknose goby is black with an electric blue stripe covering its body, while the head has a yellow stripe. A Yellowline goby has a neon yellow stripe from eye to tail. Engineer gobies are mostly black with white or yellow coloration patterns. If you want to get a goby to match or contrast the contents of your tank, you have a wide selection to choose from!

If you want to add a cleaner fish to your saltwater aquarium, you can also choose a cleaner goby. They’ll help keep your water and tank in good condition. Not all gobies are cleaners, but the Yellowline and Diamond get the job done.

There are many different species of blennies that can make great additions to your saltwater tank. They are usually easily identifiable in body shape and look, but have a lot of variations. For example, the Bicolor blenny sports a fiery orange tail with a blue front, while the Lawnmower blenny’s coloration resembles sand and sediment. Other species, like the Canary blenny and Tailspot blenny, are uniform in color.

Blennies do well in large tanks of more than 30 gallons. They’re hardy fish and can live without a ton of supervision, and they’re peaceful – which is a plus if you have a populated tank. However, as with gobies and clownfish, if there are other blennies, they may be aggressive towards them. This does not always happen if the blennies are a mated pair, though, as they will then produce offspring together and will not quarrel.

If you want a blenny that’s slightly different, you can consider a Midas blenny. The main difference of this blenny is in its diet – it’s omnivorous and can eat chopped crustaceans and shrimp as well as algae.

Wrasses are great fish for larger saltwater aquariums, such as tanks that hold more than 50 gallons. The Six Line Wrasse has a unique coloration with an orange/pink body and blue/orange stripes. They can be aggressive, though, and can make life difficult for other fish in the tank.

If you want more peaceful wrasses, you can consider the Yellow Coris Wrasse or the Green Coris Wrasse. Unlike other fish mentioned in this list, these wrasses will get along well with other fish in the tank and other wrasses.

They are very active fish and can greatly benefit the quality of your tank. They eat parasites off other fish, eat fireworms off corals, and eat snails off clams. Basically, if you want nicer and more peaceful wrasses, choose Yellow or Green Coris varieties!

For larger aquariums, Angelfish are a good choice. They’re comfortable in tanks that can hold more than 70 gallons, but they shouldn’t be placed in reef aquariums – they’ll eat the coral and clam mantles.

You can pick from a number of Angelfish, but if you want to increase color variety, the Bicolor or Oriole Angelfish is a good option. Its yellow front and blue rear make it stand out from most other fish. The Coral Beauty Angelfish is the exact opposite – the outer section of its body is blue while the interior is orange and yellow. And then, of course, we have the Rusty Angelfish, which is reddish amber with black dots and no gradient.

Angelfish in general are hardy fish, but you still should be more experienced if you want to add them to your tank, as large tanks require more maintenance, upkeep, and attention.

All Your Fish Needs at Allan’s Pet Center

Allan’s Pet Center began as an aquarium, so nobody knows fish better than we do! If you have any questions about starting a saltwater aquarium or if you’re looking to learn more about fish ownership and care, contact our store today. We’ll be happy to help!