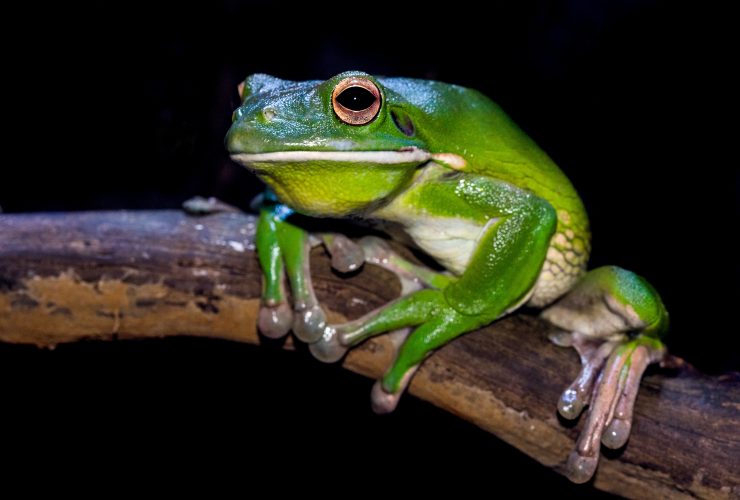 Amphibians have carved out a space for themselves in the animal kingdom as an animal between worlds. They are creatures In a state of evolutionary transition, claiming both land and water as their homes. Typically, amphibians choose to live in smaller, shallower bodies of water like freshwater lakes and ponds. As the result of millions of years of evolution, these critters have developed gills and lungs for both land and water breathing. Though amphibians aren’t the furriest animals out there, some of them make great pets! We may not recommend snuggling a salamander, but we do suggest providing one with a fantastic home. Here are some of the best amphibian pets for beginners!

When you imagine a frog in your mind, this is probably the type that appears. The American Green Tree Frog is typically found in east and gulf coast states, as far north as New Jersey, and as fast west as central Texas. These frogs can grow up to 2.5 inches long, can range in color from lime green to a bright-yellow olive, have pale bellies, smooth skin, and large toepads. They are a fairly common creature to find. So common, in fact, that you might even be able to spy one in your backyard at night! These critters prefer moist geographies like marshlands, lakes, and ponds and make their homes on floating vegetation like grasses and cattails.

They are a low-maintenance choice for new pet owners and prefer to be fed a stead diet of gut loaded crickets, wax worms and earthworms.

This frog looks a little scary with its bright green, black dotted, and tuberculous skin and red and black-spotted tummy, but this is for good reason. The Oriental Fire-bellied toad secretes a toxin when it feels as if it is in danger or surprised, and will sometimes show its belly or lay on its back to warn off predators. They’re quite small, only reaching to about 2 inches in length and are often found are found mostly in Korea, northeastern China, and nearby areas of Russia. This particular amphibian is a pretty hardy creature and does well in captivity- so long as it is in its own cage. The Oriental Fire-bellied Toad subsists on calcium-dusted small crickets and earthworms.

We recommend providing them with an enclosure containing a shallow pond as they aren’t strong swimmers and to handle them as infrequently as possible.

Pro Tip: Gut-loading crickets and earthworms with carrots and feeding them to your frog early on will give them a brighter coloration as they get older.

Tiger Salamanders have brownish to greenish-yellow skin with black or dark brown striped patterns across their entire body. They can grow between 6-8 inches long and have thick necks and bodies, strong legs, short snouts and long tails. These critters are often found on the Eastern coast of the United States between Florida and New York. They prefer living in conifer and deciduous-dense woodlands and grasslands. Though they are born in small bodies of water, they live almost exclusively on land as adults (unless they’re breeding) and like creating homely little burrows beneath the earth. They are the most common species of salamander in North America. The typical tiger salamander consumes worms, slugs, insects and snails.

Pro Tip: Ensure that you house your tiger salamander solo. The reason for this is two-fold.
1.) These salamanders are carriers of a number of bacteria and viruses that kill reptiles, other amphibians, and fish.
2.) They are voracious carnivores and have a propensity to become cannibalistic.

The Argentine Horned frog strikes an intimidating figure with its bright green and red skin (though other color variations exist) horned head, large, toothy mouth and round, spiny body. A male can range between 2.5-4 inches in length whereas a female can be between 4-7. As their name suggests, the Argentine Horned frog hails from the grasslands of Argentina, Brazil, and Uruguay. These guys make some of the best amphibian pets for beginners because they can live comfortably in a 10-gallon tank for their entire lives and are easy to care for. They need humid temperatures to survive and don’t require a little pond in their enclosure, so as long as you keep an eye on the humidity, your Horned Frog will be just fine! The Argentine horned frog will eat pretty much anything it can get it’s huge mouth on- from large adult locusts and worms to mice.

Pro-tip: Don’t feed them too many mice. Too much of a good thing will literally kill them. Additionally, make sure you house them separately from your other animals.

These delightful critters are some of the best amphibian pets for beginners because they’re so easy to care for! Did we miss any of your favorites? Share them with us!